The Grow My TSP Investment Strategy

Here you can find an explanation of the methodology and strategy we use to maximize our TSP account.

Our mission at GrowMyTSP.com is to maximize our TSP account given the restrictions of the TSP rules, the TSP Funds available for us to trade, and the price movement of the market over time.

It’s worth reading that mission statement again!  It clearly lays out our objective while acknowledging the confines within which the TSP game is played.

Want to see where we have allocated our TSP funds over time? We not only show you our past allocations, but share with you the analysis we used to support those changes.
Click Here

Our methodology is very simple to understand but requires focus and commitment to successfully implement.  Generating the “Theoretical Maximum” of your TSP account has two parts:

The combination of those two simple concepts define what we call achieving  the Theoretical Maximum results in our TSP over time.  Notice that there are no numbers, percentages, or algorithms in this definition of Theoretical Maximum.  Because the TSP stock funds tend to go up and down roughly together, there are times when the best performer that day might be the F fund or G fund.

The stock funds, and the F fund, can trend down for weeks or months at a time.  During these times, the best we can do is to Not Lose Money (this our #1 rule because compounding is our best friend) by being fully allocated in the G fund.  There is nothing that we can do to generate significantly positive returns when the stock funds are in a long term down trend.  It’s a function of the rules of the TSP game.

This idea of looking at TSP investing from a Theoretical Maximum is disruptive and VERY different from the Conventional Wisdom of passive TSP investing. To learn more about Passive vs. Active investment strategies then check out this article.

Let’s assume that you are contributing the IRS maximum each payday and take that off the table.  The next part is the reallocation methodology.  It is not possible to by fully allocated in the TSP fund that performs the best each day.  On any given day, one of the five core funds will outperform the others.  It’s impossible to know which fund that will be on any given day.

How do we identify the Market trend?

Trend line analysis is one of many tools in our kit.  If we look again at the chart of the first 30 years of the C fund, we can see 5 clearly identifiable trends, 3 up trends and 2 down trends.  By drawing a line connecting the higher lows, you can create an uptrend line.  By drawing a line connecting the lower highs, you can create a downtrend line.  Once a trend is established, it can stay in place for many years.  When a long-term trend is in place, TSP investing is simple; no reallocations are necessary.  It’s when a trend is in the process of changing that we need to focus all our effort! 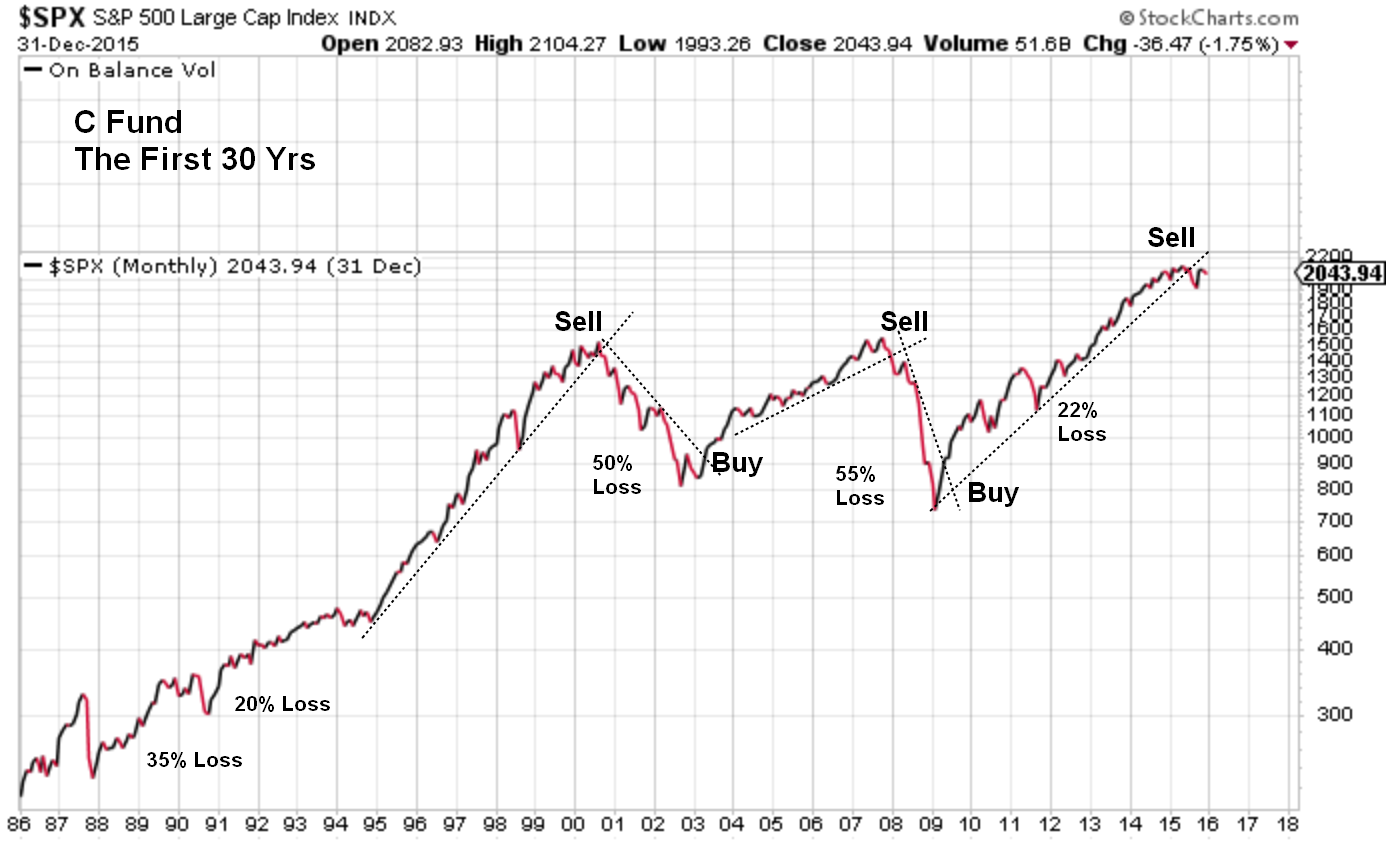 A 30-year chart of the C fund is great for perspective.  It certainly tells us where we’ve been but, it does not help us in making day to day TSP reallocation decisions.  Likewise, intra-day charts of the TSP stock funds are a great tool for revealing subtle changes in momentum and price action that can affect short term price changes.

In addition to trend line analysis, we utilize a host of technical analysis tool including Volume, Moving Average Lines, and Technical Indicators, and pattern recognition.  All these tools come together to form our reallocation decisions on a day-to-day basis.

The best way to show the practical application is thru some examples.

On 19 October 1987, the market lost 20% of its value.  At the time, it was the largest single day market loss in the history of the stock market.  It was described as a Flash in the Pan.  No one could have foreseen this disaster.

The reality is that the Market gave 3 clear sell signals well before the 19 October crash.  On September 1st, the market put in a huge negative reversal day after 3 consecutive days below its 10DMA (Day Moving Average) line.  This was the first sell signal.

In mid-September, the 10DMA crossed below the 50DMA.  This is known as the “Death Cross”; a very negative sign and the second sell signal.

The third and final sell signal came in early October with another negative reversal day closing below both the 10DMA and 50DMA.  Any decent technical analysist, who was paying attention, was out of the market on this day.  “Black Monday” happened 7 trading days AFTER the 3rd sell signal.  TSP investors following the GrowMyTSP methodology would not have absorbed the 20+% loss of Black Monday.

Getting back into the stock funds is a similar process, but in reverse.

The market put in a double bottom pattern, recovered above its 10MDA and showed support.  This was the first reasonable point at which to reallocate back into the stock funds.  A more conservative approach would have been to enter the stock funds when the 10DMA crossed back above the 50DMA, known as the “Golden Cross”.  This more conservative approach would have resulted in less gains from the bottom but, also less risk of the market rolling over. 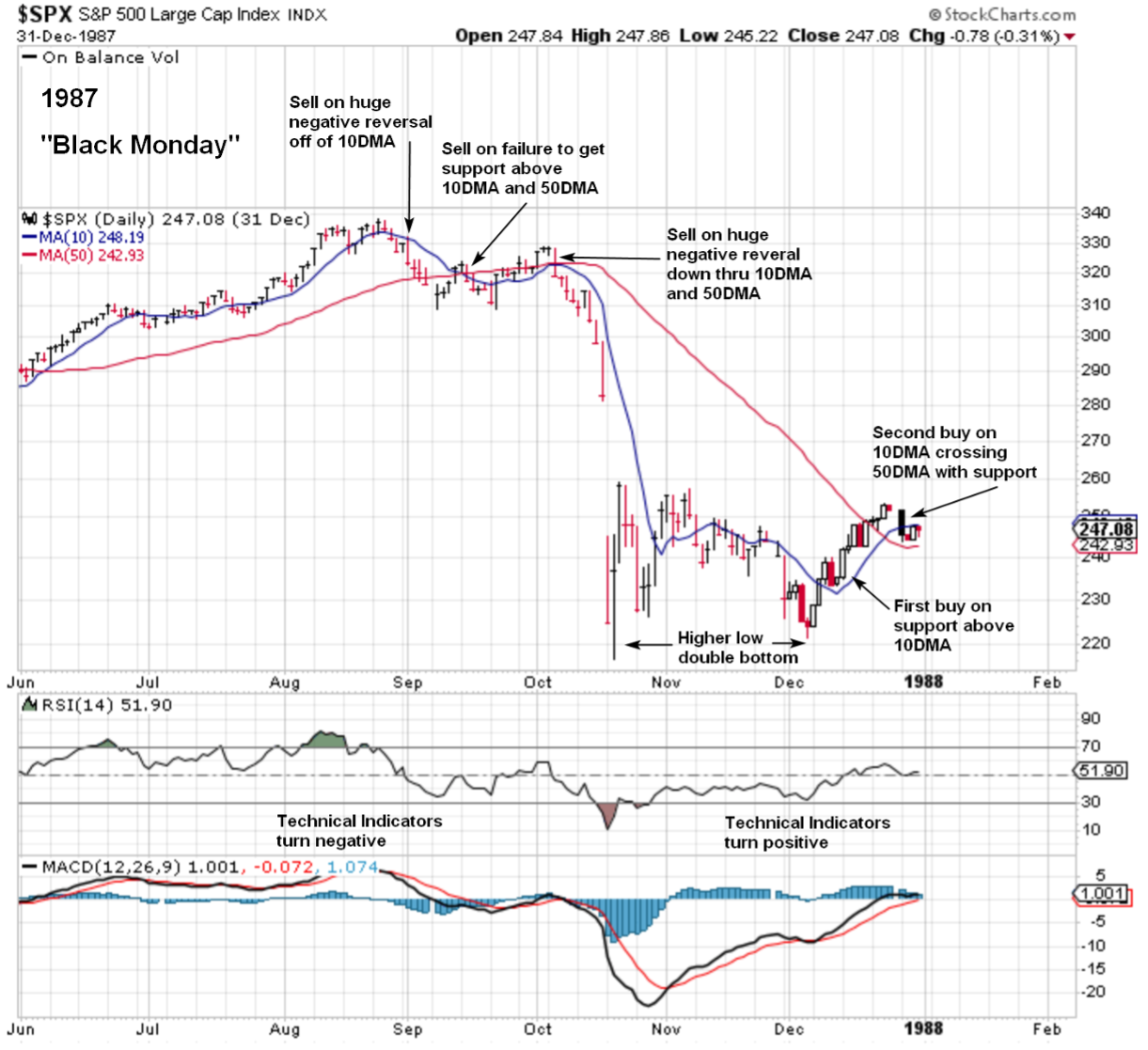 The 2000 top was another “unforeseeable” event.  The reality, of course, is that there was no one foreseeable event that caused the crash and there is no value in looking for such an event.  Price movement tells us everything we need to know!

The market put in a double top from March thru August of 2000.  By late September, the market had closed below the 10DMA, the 50MDA, and the established 1-year trend line.  This was the first sell signal.

The second sell signal came in early October when price could not get back above its 50MDA line, and the 10DMA crossed down thru the 50MDA; Death Cross.  This was the second sell signal.  From there, the market proceeded to lose 50% of its value before bottoming out in October of 2002.

With a Triple Bottom pattern forming from July 2002 thru March 2003 AND the Technical Indicators turning up, technical analysts were watching for confirmation that a bottom was actually in place.  This confirmation came in May 2003 when the 10DMA crossed up thru the 50DMA and price exploded higher.  A new rally was confirmed! 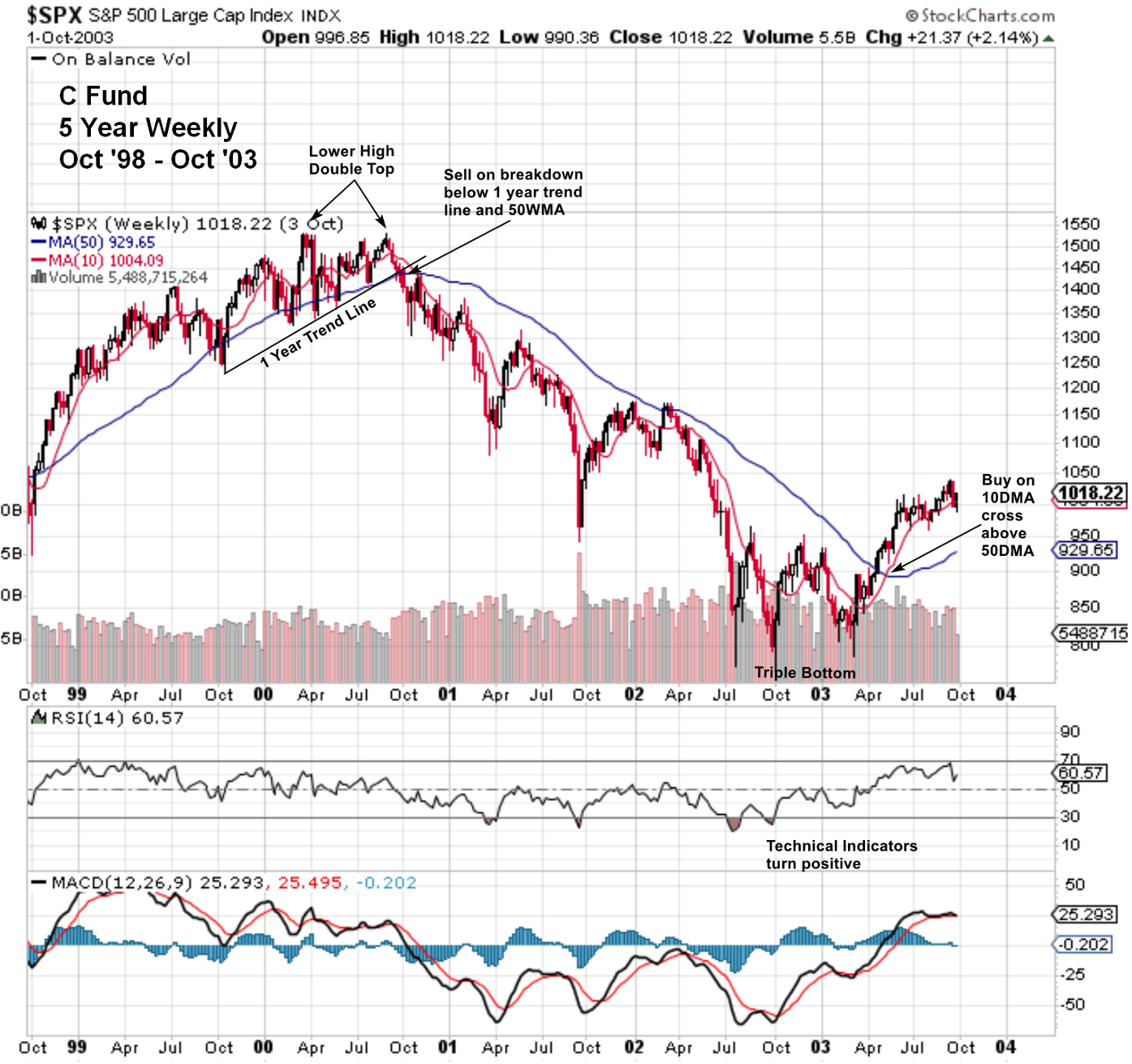 The CoVid-19 Pandemic crash of 2020 was the most recent example of the value of the GrowMyTSP methodology.  The Allocation ALERT issued on 21 February 2020 got our subscribers out of the TSP stock funds based on the analysis described back in the Risk section of this guide.  The very next trading day, the market began its collapse.  Much as we would like to claim prescience and a “Crystal Ball”, nothing could be further from the truth.  Our reallocation decision on 21 February 2020 was based on sound technical analysis of price action, not on anticipated issues related to Covid.  We DO NOT have a crystal ball…

After a 34% drop in value in 3 weeks, the market put in a V bottom and rallied above its 10DMA.  After a 3-day consolidation on the 10DMA, price gapped higher.  This was the first buy signal.  The second buy signal came as the 10DMA crossed up thru the 50DMA; Golden Cross. 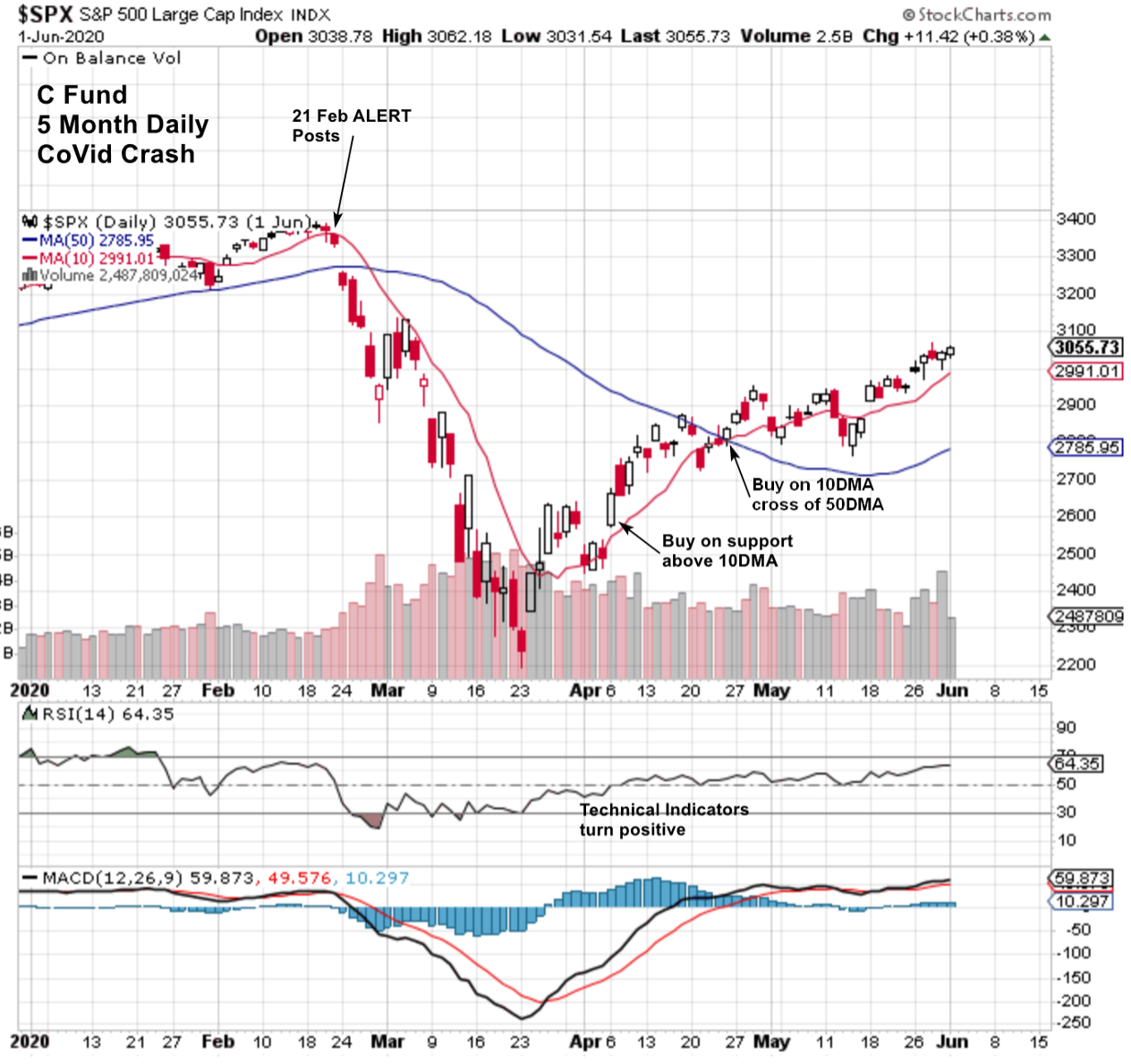 At GrowMyTSP we utilize a variety of tools and indicators to monitor price action and make reallocation decisions.  Using overlapping indicators, support and resistance levels, and pattern recognition, we can establish a level of probability in the continuation of a trend.

More importantly, we can identify the point at which the market did not move in the direction that we expected and adjust accordingly.  We do not make a decision and hope we are right.  We quantify the risk of each reallocation and adjust as the market progresses.  In this way, we maximize potential gains while minimizing downside risk.

The TSP can is a critical component of your Federal or Military retirement package.  It is also the one component over which you have some level of control.  There are many ways to play the TSP game within the categories of Passive or Active investing.  Each TSP investor must decide for themselves which methodology resonates and fits within their personal circumstances.

If you choose the active investing route and the GrowMyTSP methodology resonates with you, then sign up and become a Member of our Site.  We are primarily an education service.  Our goal is to educate Federal employees and Military service members to effectively manage their own TSP accounts with confidence, and within their individual circumstances and risk tolerance.

YOU are responsible for your TSP account.  We do not manage money, nor do we give personal reallocation recommendations.  Our ALERTS are insight into how we manage our own personal TSP accounts.

The ALERTS are a way for YOU to validate your decisions based on your personal risk tolerance and circumstances.

In the end, we hope to do our part in creating the next generation of “TSP Millionaires”!

Please confirm you want to block this member.

You will no longer be able to:

Please note: This action will also remove this member from your connections and send a report to the site admin. Please allow a few minutes for this process to complete.

You have already reported this .
Clear Clear All